According to legend, a Sumatran prince was exploring the region in his ship when he spotted an island on the horizon. Coming closer, Prince Sang Nila Utama turned to his vizier who informed him that this was the island of Temasek. It is said that as he landed on the island. The prince encountered a lion, prompting him to re-name the island Singapura (meaning Lion City). Despite the fact that lions never inhabited Singapore and that he had more likely spotted a tiger.

Singapore was soon established as a minor trading post in the powerful Sumatran Srivijaya Empire. Subsequently, Singapore became part of the Javanese Majapahit Empire in the mid- 13th century.

The Founding of Singapore 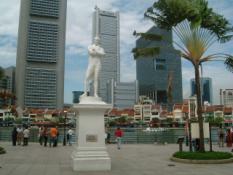 The founding of Singapore by Sir Stamford Raffles in 1819 catapulted the island out from its fishing village status. The British established its presence in the Malayan Peninsula in the 18th century trading with countries in Southeast Asia and East Asia through the East India Company. Fearing encroaching Dutch presence, Raffles argued for an increased British presence in the region through Singapore.

As a result, the British established a trading post in Singapore on 6 February in 1819 with Raffles concluding a formal treaty with Sultan Hussein of Johor and the Temenggong; the de jure and de facto rulers of Singapore.

Within half a decade, Singapore's trade revenue surpassed even that of Penang. August 1824 saw a second treaty being signed, in which the Sultan and the Temenggong ceded the island completely to the British in return for increased cash payments and pensions.

With the opening of the Suez Canal in 1869, Singapore became a major port of call for ships traveling between Europe and East Asia. The development of rubber also contributed to Singapore's rise, especially after the 1870s when it became the main sorting and export centre in the world for rubber. Before the close of the 19th century, Singapore was experiencing unprecedented prosperity and trade expanded eightfold between 1873 and 1913. Singapore was inundated by thousands of migrants from India and China; attracted by the tariff-free port. 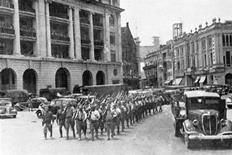 Singapore's growth as a British colony continued into the 20th century. However, the outbreak of WWII and the invasion of Singapore by Japan in 1941 quickly changed things. The British anticipating a sea attack had set up the island's defences to face the sea. The Japanese, however, invaded the island from the “back” by marching through Peninsula Malaysia. Knowing that their inferior numbers were insufficient to engage the British in direct combat, Japanese Commander Yamashita played a bluff in demanding the unconditional surrender of Singapore.

The peace and prosperity thus came to an abrupt end when Singapore was surrendered to the Japanese on 15 February 1942, and was renamed Syonan-to (Light of the South).

When the British returned three and a half years later, they were welcomed back but their right to rule was no longer assured. 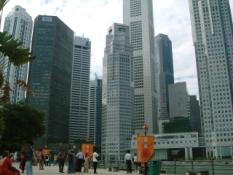 The decades after the war saw a political awakening amongst the local populace and the rise of nationalist and anti-colonial sentiments. Singapore was moving slowly towards self-government by the 1950s.

In 1959, the People's Action Party was elected with Lee Kuan Yew as Prime Minister (a position he would continue to hold for the next 31 years). A union was formed with Malaya (now Malaysia) in 1963, which proved short-lived. Almost unwillingly, Singapore became a sovereign, democratic and independent nation on the 9th of August 1965 – a date that has since been celebrated as National Day.

Independent Singapore was admitted to the United Nations on 21 September 1965, and became a member of the Commonwealth of Nations on 15 October 1965. On 22 December 1965, it became a republic, with Yusof bin Ishak as the republic's first President. Shrewd and pragmatic, then-PM Lee Kuan Yew formed a government around strict social order and a heavy emphasis on a Confucian belief system.

With the British Government's decision in 1967 to withdraw its armed forces from Singapore by the end of 1971, Singapore set out to build up its own defence forces. The Singapore Armed Forces Training Institute was established in 1966 and compulsory National Service for men was introduced in 1967. A Singapore Air Defence Command and a Singapore Maritime Command were set up in 1969. In August 1967, Singapore joined Indonesia, Malaysia, the Philippines and Thailand to form the Association of Southeast Asian Nations (ASEAN).

Early obstacles that Singapore faced included having to survive and prosper despite having almost no natural resources and the creation of a national identity despite a diaspora of immigrants. Despite this, Singapore took advantage of its strategic location and the favourable world economy to become a model of economic success in the region.

Public housing was given top priority during these years. New towns sprang up and Housing and Development Board (HDB) apartments were sold at a low cost. To encourage home ownership, Singaporeans were allowed to use their Central Provident Fund savings to pay for these apartments.

In 1990, Lee Kuan Yew was replaced as Prime Minister by Goh Chok Tong, which signaled a governmental shift towards consultation and liberalization.

After enjoying an extended period of rapid economic growth and prosperity, the Southeast Asian economic downturn of the late-1990s hit Singapore extremely hard. In one 3-month period, unemployment in the country doubled. The real estate industry, too, as with other industries was severely affected.

The new millennium has seen the city-state slowly recuperating from the crash. The real estate market, too, has slowly been warming up with the private housing market flourishing. Yet, the new millennium has also brought new challenges to Singapore's door; with declining birth rates and trained young professionals leaving the country for greener pastures being hot sources of debate.